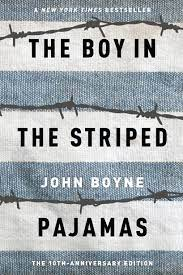 The Boy in Striped Pajamas by John Boyne is told from the perspective of a boy named Bruno, a German boy, who moves to Auschwitz(Out-with) with his family on the Führer (The fury), also known as Hitler’s command to Ralf, Bruno’s father. After their move, Bruno meets a boy on the other side of a wire fence named Shmuel.

They meet every day and Bruno shares food with him, through a hole where a child, in this case, Bruno, can fit. He finds out that they are the same age and born on the same day. Bruno experiences the death of a Jewish man, Pavel who works at their house, who was a doctor before the Nazis took over.

He discovers one day that Shmuel is working for his family. Bruno, seeing that Shmuel is very skinny and gives him a lot of food but is caught in the process by Kotler, the same person who killed Pavel. Kotler asks Bruno if he knows Shmuel, which Bruno denies. After that, Bruno does not see Shmuel for a while. When he does after a couple days, he says he is sorry and apologies for denying the fact of knowing him.

Soon, Bruno’s hair gets shaved off after the discovery of lice in his and sister, Gretel’s, hair. When they meet again, Bruno comments that he looks just like Shmuel, to which Shmuel agrees and adds just the fact that Bruno is just fatter.

When Bruno visits to see the other side of the fence, Shmuel brings him the “striped pajamas” for him to wear. He did not want to take his boots off because it was muddy outside. However, Shmuel convinces Bruno to take it off so that he does not seem different from the other people on the other side. Bruno goes in through the part in the fence where a child can slip through to the other side of the fence. He walks and is soon met with other people wearing “striped pajamas” surrounded by soldiers with guns leading them to a house-like place. Bruno, not knowing what is happening at that moment asks Shmuel who answers that they are “marching” and that the people who went “marching” never came back.

Bruno’s parents notice that he is missing and look for him. His mother, who was going back to their home, thinks that Bruno went back to their previous home, therefore, goes back. Sadly seeing that Bruno is not there.

This is a sad story by John Boyne and is not really based on a true story but how living near camp affected the family. “It seemed just the right way to tell the story from this German perspective,” Boyne said. This book might seem boring at first sight, but when you start the second or third chapter, you can notice that it becomes eventful.