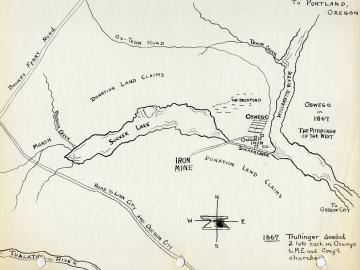 Lake Oswego…the town we call our home. If you look outside your window, most of what you see was probably not there in the 1800’s, so let’s step back in time and discover the history of Lake Oswego.

The originally so-called town of Oswego, was founded in 1850 by Miranda and Alonzo Durham. They established the city on donated land in 1850, built a sawmill, and planted the town we would eventually call Lake Oswego!

Lake Oswego’s location is one of the oldest inhabited areas in the Willamette Valley. The name Oswego was derived from the Iroquois phrase “on ti anan toque” which means “where the valley widens” or “flowing out”.

Eventually, Oswego became Oregon’s first-ever iron town. Iron in the ground and the trees above it made for an ideal place for the charcoal iron industry. According to the Oregon Encyclopedia, this later became “Oregon’s first major manufacturing enterprise”. Chinese workers provided most of the labor. In 1867, Oregon Iron Company was the first company to build a charcoal iron smelter on the Pacific coast.

The Clackamas and Kalapuya tribes were the two Native American tribes that lived on the land that Lake Oswego was established on. The area near the Clackamas River was home to the Clowewalla band; they were part of the Clackamas Chinook Indians. The main tribe in the Lake Grove district was the Kalapuyans. The Kalapuyans hunted and gathered as far east as the Cascade range and west as the Coast ranges. They traded with the Chinooks who were to the north, and the Coos people who were on the coast.

Now when you look outside your window in Lake Oswego you’ll know a little bit about how it was over 100 years ago.