A series of deadly wildfires have been wreaking havoc all along the West Coast, particularly California, Oregon, and Washington. Tearing through the West, they have burned nearly 6 million acres of land and forced hundreds of thousands of people to evacuate their homes. In addition, there have been 40 deaths and millions of people who couldn’t leave their homes for weeks due to the toxic smoke that resulted. 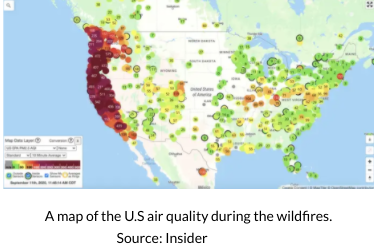 Citizens near the fires were terrified to have such a dangerous and unpredictable natural force so close to them. “It was very scary knowing that a deadly wildfire was close and at any minute it could burn down my house and all my possessions,” said 12-year old Christopher Hayashi. “We had to be ready to leave at any moment.”

A series of August thunderstorms ignited several fires across California, Oregon, and Washington. Fanned by powerful winds and dry climate, a large number of the fires exploded into record-breaking monsters, calling tens of thousands of firefighters to action. In addition to the rapidly spreading fires, a wave of deadly smoke followed, keeping the entirety of the three states locked inside for weeks. “I didn’t go outside for a week, and the smoke was bad; it looked like armageddon outside,” says Hayashi. At the time, it was by far the worst air quality in the world.

To this day, there are still some areas that are affected by the smoke, but the majority of the wildfires have been controlled and even extinguished entirely. Fortunately, most people who were evacuated have returned safely to their homes.